I was 5 years old when Disney’s The Jungle Book premiered; it was the first movie I remember seeing in a theater as a child. It was a magical experience and the beginning of a life-long love of great cinema.

Like every kid who saw the movie, I wanted the happy-go-lucky Baloo to be my new best friend in much the same way he befriended Mowgli on his journey into the jungle. I remember singing “The Bare Necessities” so much that it  — or I? — became annoying to everyone around me. And there were so many interesting characters, like Kaa the sneaky snake or King Louie, a crazy orangutan. [I have an older brother Louis, so I could totally relate to that character.]

I was thrilled to learn that Disney is releasing a special Blu-Ray/DVD combo Diamond Edition of The Jungle Book on February 11, 2014, and you can get a free Jungle Book Lunch Box with the purchase of the Diamond Edition (exclusively at Walmart). So I headed off to my local Walmart to pick up some #JungleFresh produce for this #CollectiveBias #shop; I’m planning to make Coconut-Mango Upside Down Baked French Toast that my nieces and nephews are going to love when we watch The Jungle Book together for the first time. 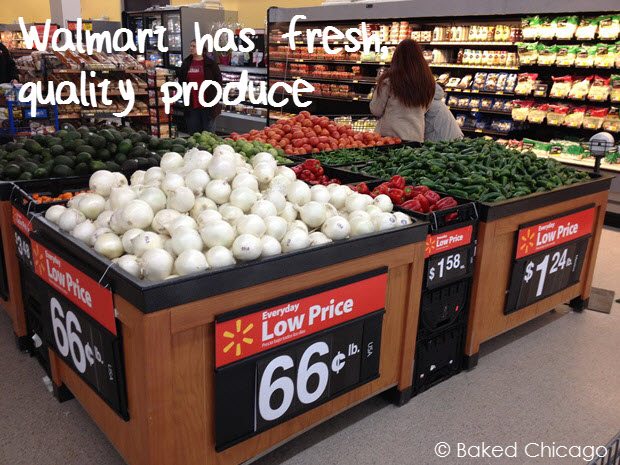 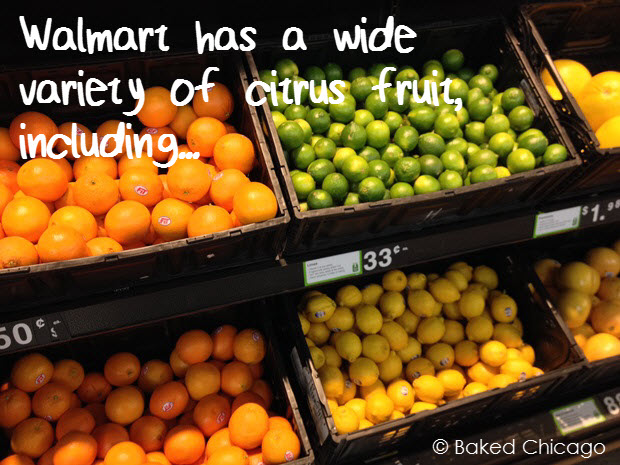 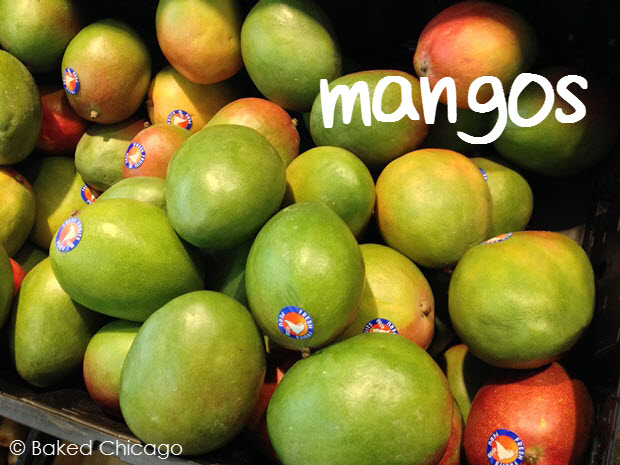 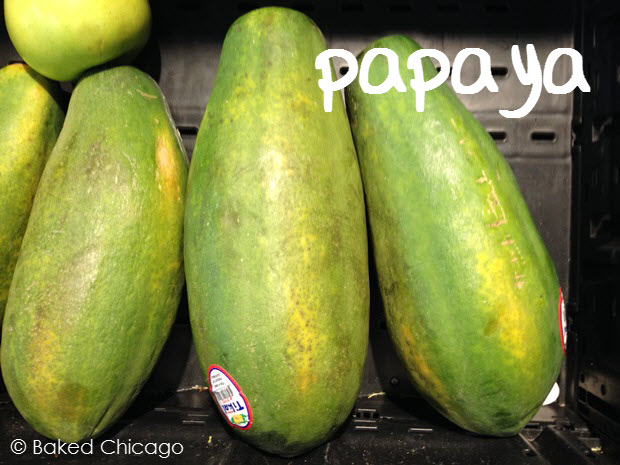 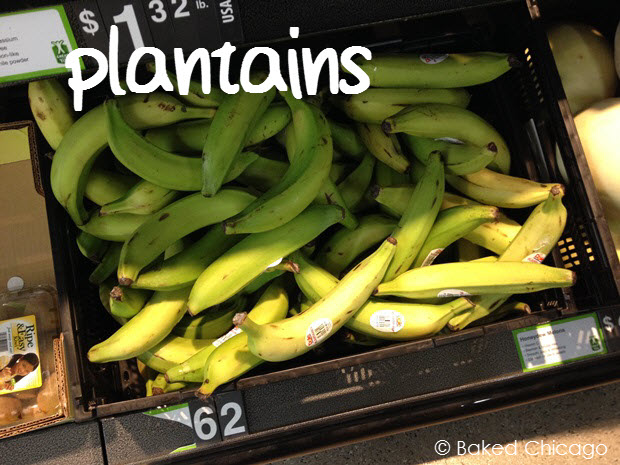 Walmart has really expanded its produce selections; I was surprised to see a strong variety of tropical fruits – including some I’ve never heard of before. I was focusing on mangos and coconut for this recipe but I also picked up a pummelo. I’d never seen one and didn’t know what it was or what it might be used for. Walmart has easy-to-ready signs for its produce that calls out some of the features and benefits of the ingredient, so I learned that pummelos are used in baking. Who knew? So that’s going to be an ingredient for a future recipe challenge! 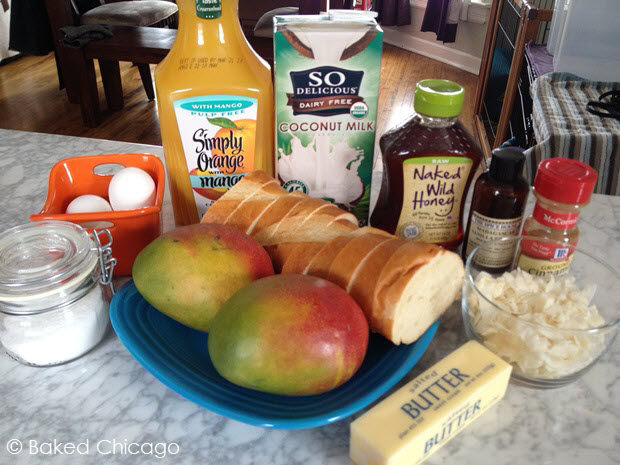 I got all my ingredients organized, including non-dairy coconut milk and orange-mango juice, to use in the recipe. I’ll also serve these beverages along with the Coconut-Mango Upside Down Baked French Toast. 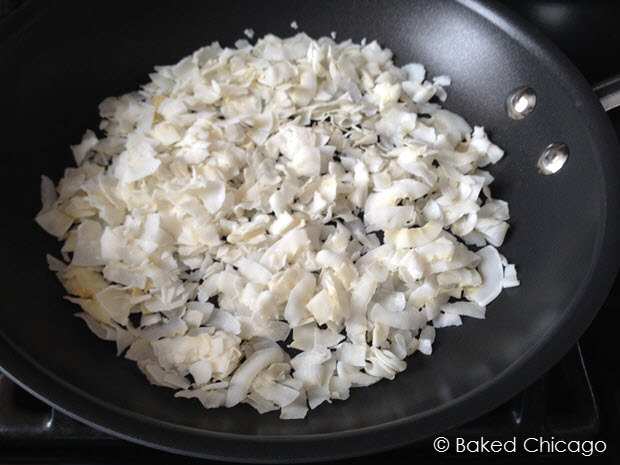 Toasting coconut flakes in a skillet takes only a few minutes, and the aroma is intoxicating.

If you’ve never done it before, slicing a mango can be a bit confusing. This video from the National Mango Board shows you how to cube or slice a mango. It’s surprisingly easy. 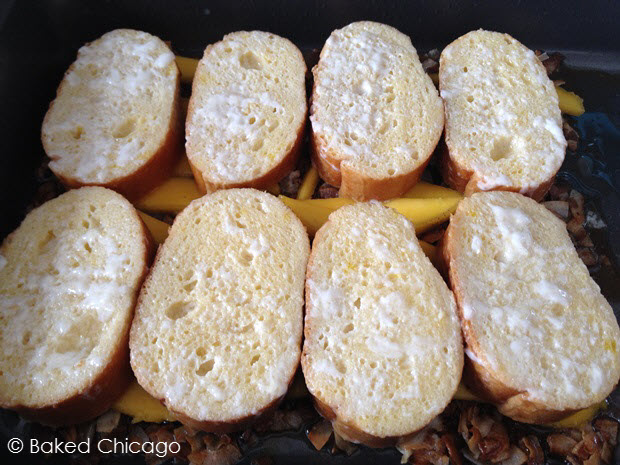 This is what all of the ingredients will look like inside the prepared pan before you pop it in the oven. 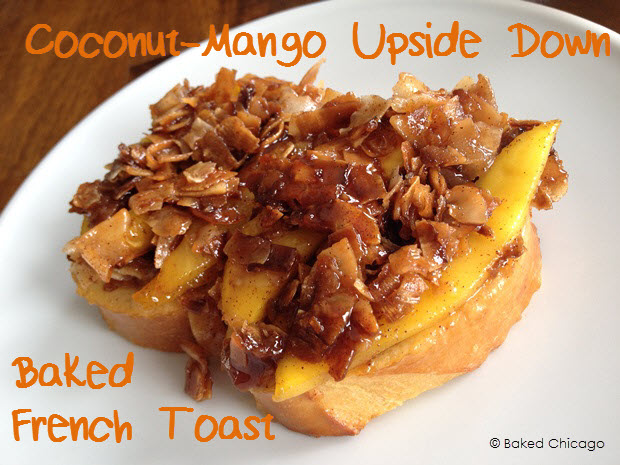 And here’s what Coconut-Mango Upside Down Baked French Toast looks like on your plate! Topped with the toasted coconut flakes, sliced mango, and honey, the dish is plenty sweet without any additional condiments for me. But you may wish to dust it with some confectioners’ sugar. Any way you serve it up, it is soooooo good. 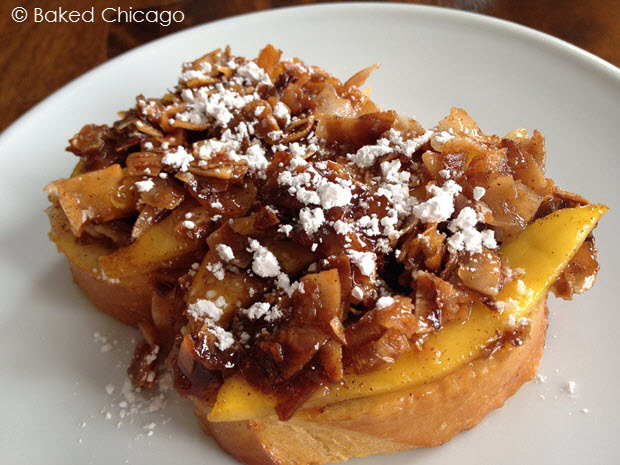 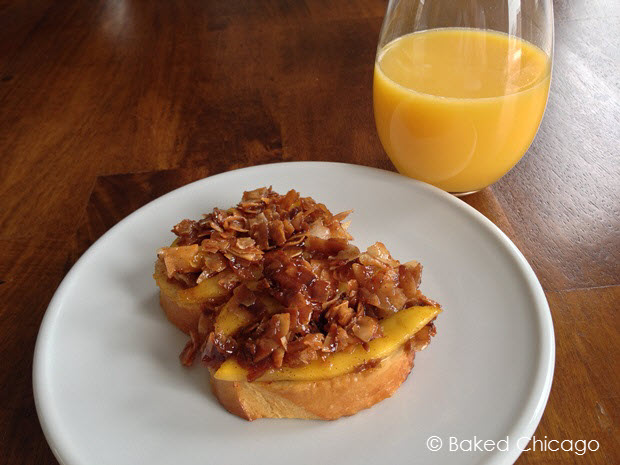 Place the flaked coconut in a large skillet. Cook over medium heat, stirring frequently, until the flakes are mostly golden brown. Do not overcook.

In a small microwavable bowl, melt the butter. Then mix in the cinnamon, honey and toasted coconut. Pour this mixture into the prepared baking pan, spreading it to evenly coat the bottom of the pan. Space the sliced mango evenly over the coconut mixture.

In a shallow bowl, whisk together the eggs, vanilla, salt, juice and milk. Dip both sides of the French bread into the egg mixture, letting it soak up the liquid. Then place it in the prepared pan.

Bake for 20 minutes, or until golden brown. Invert onto a serving platter and serve immediately.

The coconut-mango upside down baked French toast is mildly sweet without any garnishes, but you may prefer to sprinkle confectioners’ sugar on top or use your favorite syrup.

You could also prepare this the night before, all the way up through placing the French bread slices dipped in egg batter into the prepared pan. Securely wrap with plastic wrap overnight. Remove from the refrigerator while you’re preheating the oven. Continue cooking as directed.