What ya gonna do when you have a bushel of Honeycrisp apples? Make some rustic applesauce, of course!

With the recent cold and damp weather we’ve been having here in Chicago, my allergies have been in a total uproar. The kind of weather where you just want to cocoon inside all weekend. So I thought it was the perfect opportunity to dust off the slow cooker and do some experimenting with adding lavender to a chunky applesauce recipe. Selfishly, I also wanted to be able to smell the apples and lavender and cinnamon throughout the house all day. Sort of like aromatherapy for my allergies.

I had these elephant-sized Honeycrisp apples from Mariano’s that were crisp, juicy and perfect for a homemade applesauce. This is such a simple recipe, but – truth be told – the hardest part is peeling the apples. I’ve found the fastest way for me is to use a butcher knife to first core the apples. I cut one side, then the opposite side and finally the remaining sides. That results in two really large slices and two medium slices, both of which are pretty easy to peel with a paring knife.  To keep the apples from oxidizing (I’m impressed I know what that means) I immediately put them in the water/lemon juice mixture inside the slow cooker as I cut them.

Some homemade applesauce recipes call for brown sugar, but I wanted to keep the processed sugars to a minimum so I used instead a high-grade honey. Then you break the cinnamon sticks and toss them into the mixture. Note: the cinnamon is going to turn the applesauce a medium brown. If you prefer your applesauce “unscathed” simply omit the cinnamon for a natural, golden color.

Every now and then, I become obsessed with certain ingredients (like Honeycrisp apples!) and use them over and over in recipes. One ingredient I’ve been dying to try is edible lavender, so I took two tablespoons of lavender flower buds (sourced from The Spice House in Chicago). To release the fragrant oils, I used the back of a tablespoon and crushed the lavender inside a small bowl (see picture below). The aroma is phenomenal. Note: While I used two tablespoons of lavender, I’m recommending in the recipe for you to use only 1 tablespoon. That will make for a better balance between the cinnamon and lavender. 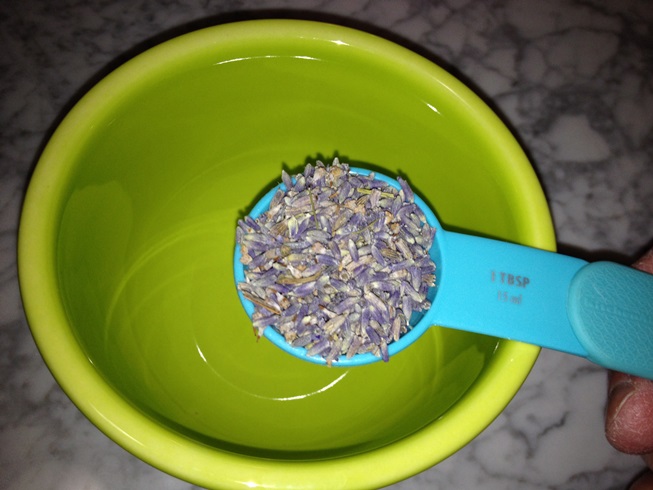 Now your slow cooker gets to do all the work. Simply cover and let it cook on high for 3 to 4 hours. If desired, you can stir every hour or so to ensure the cinnamon is steeping properly. When done, discard the stick cinnamon. If you prefer a rustic, course consistency, use a potato masher to mash the apples to the desired consistency. If you like a smoother consistency, then use an immersion stick blender to quickly blend. Stir in the vanilla and let cool for a bit before storing.

Put in an airtight container. It will store in the fridge for about 10 days or in the freezer for up to 8 months. The lavender-cinnamon applesauce is a special dish for a family gathering, and it can also be used (like you would with regular applesauce) for other baking projects like breads or muffins.

In a 4-quart or 6-quart slow cooker, combine the diced apples, honey, water, cinnamon sticks and lemon juice. Crush the lavender before adding; I used the back of a tablespoon to crush the flower buds – which releases the fragrant oil. Fold the lavender into the mix; then cover and cook on high-heat for 3 to 4 hours.

Remove and discard stick cinnamon. Using a potato masher, mash apples until you’ve achieved a coarse consistency. Or for a smoother consistency, use an immersion blender. Stir in vanilla and turn off heat. Let set for 10 to 20 minutes.

Ladle applesauce into airtight containers and seal. Applesauce will last in refrigerator for up to 10 days or in the freezer for up to 8 months.