To make crust, preheat oven to 350F degrees. Pulse cookies in food processor to fine crumbs. Then pulse in sugar and butter until combined. Press crumb mixture evenly onto bottom and sides of 9-inch pie plate. Bake until golden, about 15 minutes. Transfer to rack to cool.

Prepare filling by selecting 20 large strawberries as close to same size and set aside. Cut remaining berries into 1/4 inch dice and toss with sugar and lemon juice. Let stand, stirring occasionally, for 30 minutes. Drain berries in a sieve set into a large glass measuring cup. Add enough water to measure 2 cups. Transfer liquid to medium saucepan and reserve berries. Sprinkle gelatin over strawberry liquid and let soften 1 minute. Bring to a bare simmer, stirring until gelatin has dissolved. Add diced berries, then transfer to metal bowl set in ice bath and stir frequently until mixture begins to mound (20 to 30 minutes).

Spoon 1/2 cup filling into pie crust and arrange reserved whole berries, stem ends down, on filling. Spoon remaining filling over and between berries. Chill pie until filling is set, at least 4 hours.

In heatproof bowl set over (not in) saucepan of simmering water, combine butter and 1 cup chocolate chips. Heat and stir occasionally until just melted.

Remove mixture from heat and stir in sugars, salt and then eggs. Mix in flour, stirring just until combined. Spread batter evenly in prepared pan. Bake until toothpick inserted comes out with moist crumbs, 30 to 35 minutes.

Remove from oven, and sprinkle with remaining chocolate chips, then marshmallows and nuts. Bake until chocolate is shiny and marshmallows are puffed, about 5 minutes. Cool completely in pan.

Whisk over medium-high heat until cream thickens and boils 1 minute. Remove from heat and whisk in butter and rum. Remove vanilla bean. Transfer mixture to bowl and press plastic wrap onto the surface. Chill until firm for at least 4 hours.

Preheat oven to 375F degrees. Spray 9-inch glass pie dish with nonstick spray. Roll out dough between 2 sheets of parchment paper to 12-inch round. Peel off top parchment. Using bottom parchment as aid, turn dough over into prepared dish. Peel off parchment. Fold overhang under and crimp crust edges decoratively. Pierce crust all over with fork; freeze for 10 minutes. 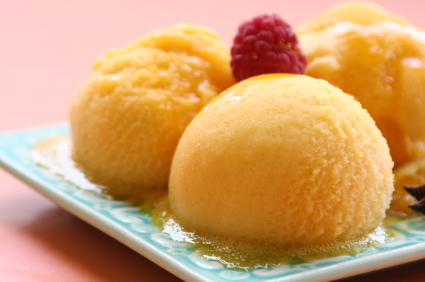 Peel and pit the mango, then chop. Puree with lime juice and sugar in blender until smooth. Divide among tall glasses, then top with ice cream and ginger ale. Serve with straws.

In another bowl, beat butter, brown sugar and honey with electric mixer until light and fluffy.  Add eggs, one at a time, beating after each addition.  With mixer on low, gradually add flour mixture.  Beat until just combined.  Beat in applesauce.

Coat a 9-inch tube pan with nonstick spray.  Pour batter in pan; smooth top with spoon.  Bake until a toothpick inserted in center comes out with only a few crumbs - about 50 to 60 minutes.

Cool on a wire rack for 10 minutes.  Turn onto pan or baking sheet.  Cool completely and dust with confectioners' sugar before serving.

Heat oven to 450F degrees. Unroll 1 pie crust on work surface. Roll lightly with rolling pin. Cut 12 rounds from crust with 2 1/2 inch cookie cutter. Press rounds into bottom and up sides of 12 mini muffin cups. Repeat with remaining pie crust. Place about 5 of the dark chocolate chips in each crust.

In medium bowl, beat cream cheese, brown sugar, caramel topping and egg with mixer on medium speed until creamy. Spoon evenly over chocolate chips, about 1 1/2 teaspoons for each tart. Bake at 375F degrees for 10 to 12 minutes or until cheesecake is set. Cool 10 minutes and remove from pan to cooling rack.

In small custard cup or microwavable bowl, place remaining chocolate chips and oil in microwave on high for 30 seconds. Stir and microwave for another 30 secons, or until melted. Stir and drizzle over each cheesecake and immediately sprinkle with pecans. Refrigerate for 2 hours before serving. 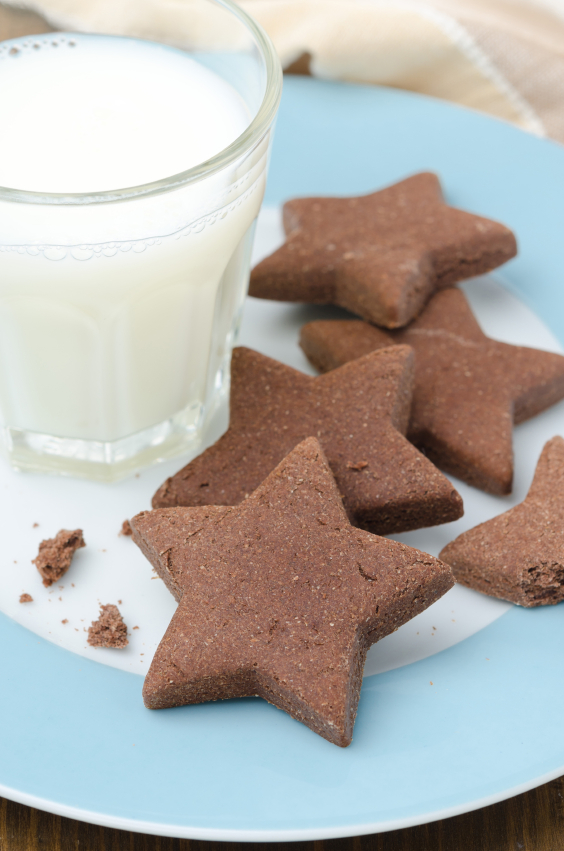 Preheat your oven to 300 degrees F. Coat an 8-inch round cake pan with non-stick spray or butter.

With an electric mixer, beat the butter until creamy. Add the flour, sugar and cocoa - and mix until combined.

Chill the dough in refrigerator for 10 minutes. Pat down the dough into the pan. Press down the edges with tines of floured fork.

Bake until firm, about 30 minutes. Immediately score into wedges. Turn out pan and break wedges apart. Let cool on a wire rack.

Bake 1 hour and 15 minutes, or until cake is golden brown and wooden stick inserted comes out clean. Transfer to a wire rack to cool. Invert onto plate and dust with powdered sugar.

Bring cream, milk and cinnamon to a simmer in saucepan. Remove from heat and whisk in chocolate until melted. Whisk together yolks, sugar and a pinch of kosher salt, and then whisk in the chocolate mixture. Strain through a fine mesh sieve into a bowl and allow to cool to room temperature.

Preheat oven to 300F degrees. Line a roasting pan with a folded kitchen towel and put 6 to 8 ramekins on towel. Divide cream custard among ramekins and add enough boiling hot water to pan to reach halfway up the side. Cover pan tightly with foil and poke some holes to allow steam to escape. Carefully place pan in oven and bake until custards are set around the edge, but slightly wobbly in the center - approximately 30 minutes.

Cool custards on rack uncovered about 1 hour, then chill at least 3 hours. Serve with whipped cream and orange zest or orange peel for decoration.

Gently press down on each cookie to flatten. Bake in 300F degree oven for 25 to 30 minutes or until bottoms start to brown.

Cool and remove to a wire rack. Combine confectioners' sugar, milk and vanilla until frosting is smooth. Drizzle on cookies and sprinkle with crushed candy.

Raise heat to 425F degrees. For filling, combine eggs, pumpkin, evaporated milk and brandy in a small saucepan over medium-low heat. Stir occasionally until warm, about 7 minutes. Set aside.

Combine brown sugar, cinnamon, ginger and nutmeg in a large bowl. Stir in the pumpkin-egg mixture. Pour into the crust and bake 10 minutes. Lower heat to 350F degrees and bake until set (35 to 45 minutes). Remove pie from oven and let cool one hour. Refrigerate until ready to serve.

For whipped cream, combine confectioners’ sugar and cinnamon in small bowl. Combine the whipping cream and vanilla in a large bowl. Beat with a mixer on medium-high speed until soft peaks form, about 2 minutes. Add sugar mixture to whipped cream, beat until medium peaks form. Service this caramel-cinnamon pumpkin pie with whipped cream and drizzle with caramel sauce, warmed.